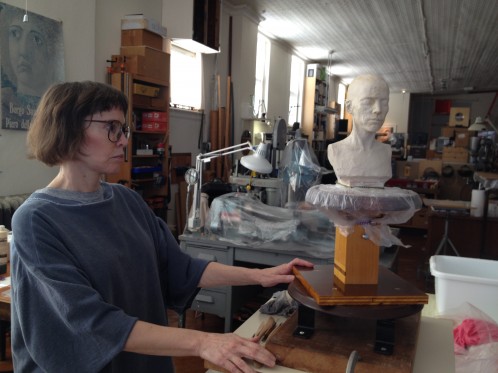 The Center for Documentary Studies and the Southern Documentary Fund are pleased to present a free screening of Olympia Stone’s Elizabeth King / Body of Work. Elizabeth King puzzles over with an acute sensitivity to both life, and the life-like. She has created her own genre at the intersection of the classical and automata.  An accomplished artist with an eye for the intimate meaning of gesture, King obsessively manipulates her materials to produce pieces that both approximate and challenge the viewer. Newly retired from 40 years of teaching, King is more than ever able to focus on her work, and examine her motives and making. With major solo shows driving her, King seems poised to get her due. In studio visits, conversations with peers and art world figures, Elizabeth King/ Body of Work invites the viewer to consider what looking and seeing one another means in our increasingly visual world.

Olympia Stone is an independent producer of documentary films about art and artists. Her production company, Floating Stone Productions, is based in Chapel Hill, NC. Her films probe the motivations and personal histories of eclectic artists as a way of providing intimate insight into their work. Her previous films include The Original Richard McMahan (2017), Curious Worlds: The Art & Imagination of David Beck (2015), The Cardboard Bernini (2012) and The Collector (2007). http://www.floatingstone.com/elizabethking