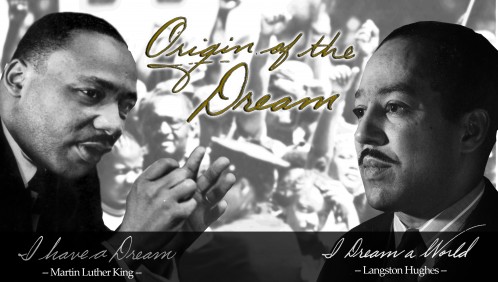 Origin of the Dream

Langston Hughes and Martin Luther King, Jr. met at the crossroads of dreams shared and yet unfulfilled. The recent unveiling of the earliest known recording of Dr. King using the famous phrase “I have a dream,” from Rocky Mount, North Carolina in November 1962, sheds new light on the origin of King’s dream within Langston Hughes’ poetry and prose.

The poet was also influenced by the preacher, as Dr. King’s actions had a profound impact on Hughes’ writings from the late 1950s till 1965, a period of Hughes’ life seldom explored. The new feature-length documentary, Origin of the Dream, will illuminate the unexplored intersections of these two cultural icons by examining the history that joined them, and the parallel language and imagery they evoked so powerfully to expose the idea that the American Dream was out of reach for so many of its citizens.

Dr. Jason Miller, associate head of the English Department at North Carolina State University, has teamed up with award-winning filmmakers Rebecca Cerese and Cash Michaels to turn his book Origins of the Dream – Hughes’s Poetry and King’s Rhetoric into an insightful documentary. The film will mix the traditional historical elements of archival footage, photographs, and primary source documents with dramatic interpretations of works by Hughes and King read by some of today’s best, most socially conscious hip-hop artists, along with evocative animation that will bring this story to life for today’s generation. As current events throughout our nation remind us, our country is still dealing with the reality of shattered dreams.

Overburden
< BACK TO ALL PROJECTS >
One Band Indivisible